Discover the 3 rules for "High Value Banter" to help you create romantic tension and emotional attraction with men online and take you from being just another awkward stranger to the most interesting, mysterious and exciting woman he has ever spoken to. 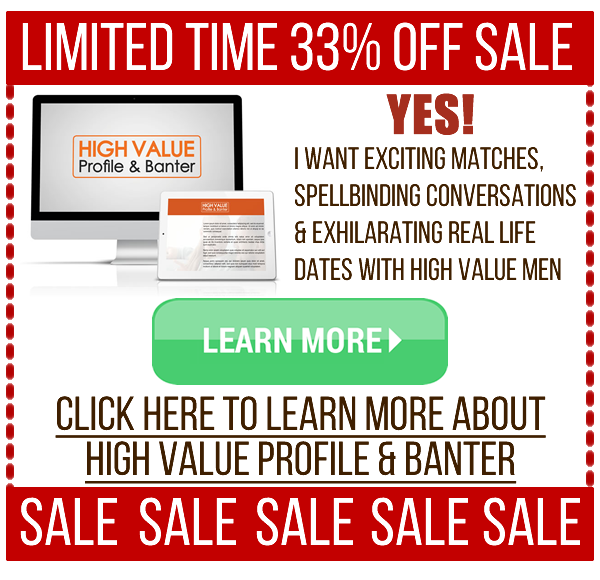 Number 1, you’ll start to have a lot more exciting conversations, that’s for sure! You’ll start to notice that men will enjoy speaking to you, and want to continue the conversation momentum with you… (Because it’s actually fun to speak to you unlike the 95% of women out there.)

Number 2, you’ll find it so easy to weed out the men who aren’t right for you because they cannot and will not respond appropriately to your banter. Those men are a No-No! If they don’t play along with you, it’s an absolute NO.

See, High Value Banter is also the BEST way to filter out men who aren’t worth your time. Most of the time, they just eliminate themselves.

And number 3, you will probably get asked out a lot more by men. That’s just how it is, and that’s just how men respond to this type of banter.

So yes, High Value Banter will get you asked out more than you can ever imagine in your wildest dreams. 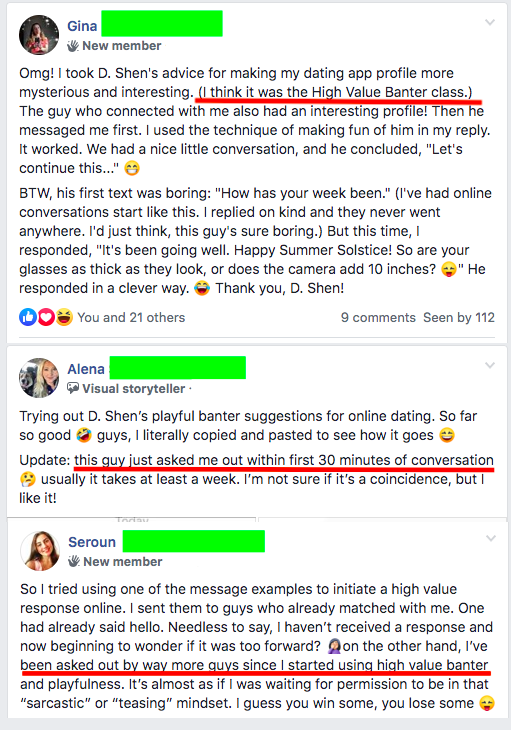 Absolutely not. (And thank God.)

Some men may have never had this type of playful interaction before and they won’t know what to do.  The men who have been abused all their lives may even find this intimidating. Some jaded men may think you’re playing “mind games”.

This High Value Banter that I teach, may even throw some men off their own “game”. And frankly some men are too far “gone”. (…They’re dead inside.)

Would you really want to have a relationship with someone who’s dead inside?

Here’s something important to understand.

Very often, when you don’t feel a spark with someone, the biggest thing missing is that playfulness. (Sometimes it’s easy to get nervous, awkward and tense around someone new, especially for you as a woman as safety can be a huge factor there.)

What I truly love about High Value Banter is that if you do it right, it will naturally help you filter out the wrong types of men. All you have to do is be attuned to how they respond to your High Value Banter.

I don’t care how tall dark and Jason Momoa looking a man is, if he doesn’t respond well to your High Value Banter, then that’s a really bad sign.

Any man who values the connection and attraction between you and him, will WANT to play along with the banter that you lead with. They may not have the right “comebacks”, or be as smart in their responses, but they would want to play along.

That’s what you’re looking for.

Because emotional attraction is the most important element in the whole universe. Well, at least in the universe of intimate relationships. Without that emotional chemistry, romantic relationships would never form, ever.

And so the very first step to that process of a romantic relationship is playfulness. Playfulness should be the very first filter that men have to pass through, not their looks, their occupation, status, etc.

(Ok, looks may score extra points if it was Jason Momoa…)

So thank GOD that not every man will respond positively to your High Value Banter.

What if I don’t feel comfortable using sarcasm?

So you’re a serious one huh! 😛

Ok, so here’s the deal. None of what I’m teaching designed to come across as sarcasm at all. This is entirely high value and playful banter.

So here’s the difference.

Sarcasm in itself carries the connotation and intent to mock or convey contempt.

Where as playful banter carries the intent to tease and be playful. They are very different in nature. (Of course it does take practice to thoroughly understand the finer distinctions between the two.)

The point here is, if you’re trying to tease. And as such, you have to be attuned to where the other person is emotionally. The less attuned you are, the less present you are, the worst it will come across.

So if you don’t feel comfortable with this type of playful banter, then it’s imperative that you start practicing it, and over time you will rediscover that playful side of you. (Thank me later.)

Will you make some mistakes along the way, hell yeah. But will those mistakes help you become more attuned in the future? Absolutely.

I can tell you with absolute confidence that there’s literally no way around this process. So be bold, start practicing High Value Banter, and allow yourself to enjoy the process. (…And I can promise you, you will find your groove very soon.)

Leave me a comment below and share with us what specifically you would like to learn more about when it comes to attracting high value men through the platform of online dating. 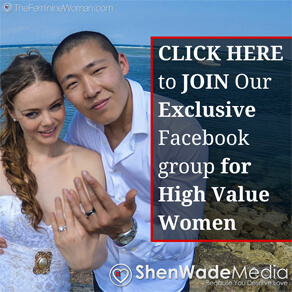